Farmer's Daughter was transferred to secondary after 16 days of primary fermentation at 68 degrees, and I am really pleased with the beer so far.  It has a distinctively dominant Brettanomyces aroma that is tantalizing.  There's an earthiness coupled with a faint barnyard and wet floral note in the background.  The beer is characteristically red and still pretty hazy as active fermentation is still going strong.  The initial fermentation brought the gravity down to a very respectable 3.6 P from an original gravity of 17.1 P.  The final product is going to have a higher ABV than allowable in the BJCP style guidelines, but who ever complained about a beer being too delicious and alcoholic?  Now it's time to wait and let Brett, Pedio and Lacto slowly finish the job. 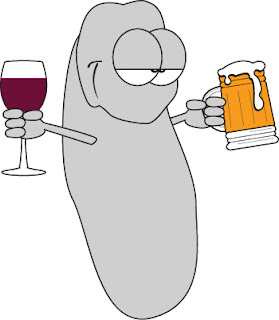 I've also officially given my auto siphon, carboy brush and two Better Bottles over to funk fermentations.  Now I have a reason to buy some new equipment.
Posted by Daniel Schroeder at 8:11 PM 0 comments

A few weeks ago, Chris from Lewy Brewing came over for an epic brew session.  Eight hours and many beers later the result was 14 gallons of wort destined to be fermented in a way that was new to both of us.  We started with a 10 gallon batch of Flanders Red (recipe here) which was split into two carboys for fermentation.  In Chris's carboy WLP001 CA Ale was added for primary fermentation and WLP655 Sour Mix 1 was added seven days later as primary fermentation began to wane.  In my carboy, US-05 and WLP655 Sour Mix 1 were added at the same time.  Our plan is to ferment each carboy for at least a year, letting the bugs in the Sour Mix slowly convert all of the residual sugars that the primary strain can't consume.  Then we plan to blend the two beers, producing something more complex and delicious than either of the individual beers on their own.  Neither Chris nor I has experience fermenting with Brettanomyces, Pediococcus, Lactobacilus and Acetobacter but we have high hopes for the result.  Ending up with something palatable and interesting would be a win for our first attempt.


In addition to the Farmer's Daughter Flanders Red, we used the third runnings from the spent grains to extract a weaker four gallons of wort.  We then added approximately two pounds of DME to raise the original gravity and did a second boil.  The chilled and filtered wort was placed into four one gallon carboys and the bottle dregs from four different sour beers were pitched directly inside after aeration, following instructions from The Mad Fermentationist.  We used the following bottles of commercial beer for our bottle dregs: 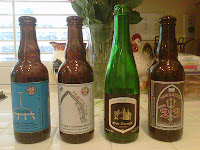 Two weeks into the experiment we have strong fermentation happening in both Flanders Red carboys and slow, but steady fermentation in the one gallon dregs beers.
Posted by Daniel Schroeder at 3:34 PM 0 comments

American homebrewing is usually informed by German and English methods, which value an adherence to cleanliness, strict recipe formulation, and the use of particular ingredients for particular styles.  This attention to detail and traditionalism can create some delicious and satisfying beers, but doesn't always leave room for experimentation beyond the basics.  I've been reading about, tasting, and just generally pondering sour beers, and have been forced to shift my perspective on brewing.  Until recently, the idea of introducing an unpure culture of yeast into my homebrewery scared the shit out me.  Like learning a new language, it takes time to become comfortable expressing yourself in a new medium, but I've made some strides toward a more enlightened approach to making delicious beer at home and challenging myself in the process.  Much of the information I've gathered has come from like-minded people, whose generous sharing of knowledge has been inspiring.  Specifically, Lewy Brewing, The Mad Fermentationist and Bikes, Beer and Adventures have cleared away the barriers in my psyche to allow me to begin walking a new and perhaps more rewarding path as a more experimental homebrewer.  So why am I writing this?  I don't profess to be the most knowledgeable or the most able brewer.  I certainly have plenty to learn.  I want to record my thoughts and experiences so that I have a record of my own evolution and a way to prompt self-reflection.  If it appeals to others and perhaps helps or inspires them, then all the better.
Posted by Daniel Schroeder at 10:12 AM 0 comments