Perhaps a bit of a stretch, but no less intriguing than the other classic dichotomies.  They each present a metaphor for man's struggle against his own human weakness (perceived or real) and suggest a certain codependency of existence.  In much the same way that good as a concept cannot exist without evil, so must Saison beget Dark Saison as a counterbalance. ;)

All joking aside, Dark Saison is nothing new among homebrewers and other beer innovators.  Its very name is a bit of a misnomer along the lines of "Black Imperial India Pale Ale" since the saison family is typically pale straw to orange in color; I'm not particularly inclined to a strictness of style (and I prefer the term Cascadian Dark Ale, personally).  The idea of taking the highly attenuated dryness and spiced characteristics of a saison, and complicating the profile with darker flavors suggesting stone fruit is intriguing.  I took plenty of cues, recipe ideas and encouragement from others who have already brewed this style.  I also decided to do something different with a more traditional saison base and have two saisons fermenting side-by-side.  And, taking the philosophical/literary approach, I named them appropriately. 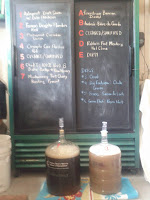 Yes, cucumber.  Lewy suggested this idea and it appealed to me immediately.  Cucumber water is the sort of delicate beverage that you find in spas and upscale summer resorts, but it's a pretty refreshing and simple drink to make.  The cucumber gives the water a mild clean neutrality that I hope will compliment the refreshing, thirst quenching flavors in a saison.  I plan to add sliced cucumber to the beer for a brief amount of contact time after transferring to secondary.  The grain bill is about as simple as you could ask for, using only Belgian Pale Malt and Flaked Wheat (87% and 13% of the grist, respectively).  I also added grains of paradise during the last 20 minutes of the boil for a citrusy pepper note.  Czech Saaz hops and WLP568 Belgian Saison Ale Yeast Blend round out the ingredient list.


With the two saisons being complementary, I decided to use the same percentage of base malt for both, with Belgian Pale and Pilsner Malts making up 87% of the Dark Saison's grist.  Vienna, Carafa II (dehusked), Caramunich, Flaked Oats and Special B provide the additional grain-based fermentables and up the SRM above 21.  The specialty grains should provide some additional sweetness and complexity.  I'm excited to see how the Special B's characteristic raisin flavor works as a compliment to the nearly two pounds of pureed dates I added during the final fifteen minutes of the boil.  An additional 6 ounces of a mild molasses (not blackstrap) added along with the dates should give some burnt brown sugar flavor.  I decided to hop this beer a little more aggressively, using Citra hops in greater than normal quantities to provide some additional fruitiness in an attempt to layer the darker malt flavors.  Like the Cucumber Saison, this beer is fermenting with WLP568.

Lewy provided yeast from his delicious Sorachi Ace'd Saison, generously washed and shared with me.  The beers will be allowed to free rise in my garage (outside of the fermentation chamber) during initial fermentation.  I can't wait to have these on tap side-by-side.
Posted by Daniel Schroeder at 9:30 AM 2 comments

The USDA is a huge entity, monitoring our food, agriculture and the natural resources associated with and produced in relation to them.  Most people's experiences with the USDA are related to food labeling and quality control.  The USDA is particularly relevant to brewing science, as ingredients that make up our simple beverage of choice should always be evaluated for cleanliness and quality.  They also breed and hybridize plants with the intention of making them more disease resistant or viable under different growing conditions.

However, there is a lesser-known research arm of the USDA that strives to solve the everyday food and agricultural problems of average Americans.  One way they aim to do so is by providing access to the National Germplasm Cloning Repository.  The average American can request seeds and cuttings from a variety of different cultivars like pears, blackberries, strawberries, quince, gooseberries and hops among others.  Availability is limited, but those interested in researching experimental varieties of plants can make free requests on the ARS website.  In early March I made a request for three hop cultivars, hoping to grow them to maturity and use the hops in homebrew.  I had pretty much forgotten about the request, when today I received a package with my cultivars and growing medium included!  Here's what I received and what I know about them:

Very similar to Saaz and used primarily in lager beers for flavor and aroma.  Also known as "Golden Hops" due to its cone coloration.  3.0 - 5.5% AAU range.

A descendant of Cluster bred originally in 1968 as a disease-resistant bittering hop, but no longer commercially viable.  6.0 - 10.0% AAU range. 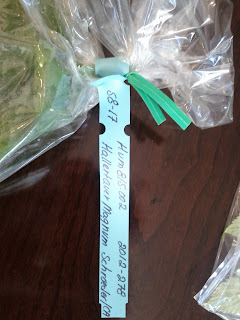 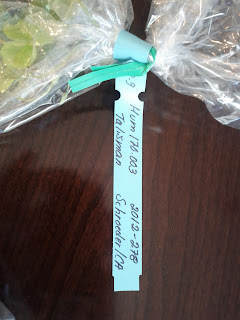 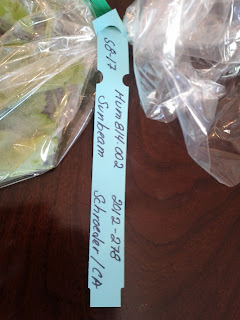 I entered a beer in the homebrew competition at the San Diego County Fair this year.  It's one of the largest single day beer competitions in the world with over 1200 entries and it was a lot of fun besides.  With all of the enthusiasm for brewing that people in San Diego have it was no wonder I saw so many different people trucking in coolers of precious hand-crafted ale and lager to be critically evaluated.  You can officially enter ten different beers, but I only had one in bottles that I thought warranted sharing with people other than close friends and family.

I submitted Senne Valley Saison into category 16E: Belgian Specialty Ale because it was spiced with coriander seed and dosed with Brettanomyces near the end of fermentation.  The beer came out clear and light orange, with a delicate carbonation and a smooth even taste.  It's dry and hints at tartness that doesn't really come through.  It also smells very nice, being somewhat reminiscent of Orval.

The atmosphere at the competition was fraternal to the utmost with pretty much everyone in attendance excited to be there.  When the first round results were announced, with only 30 odd beers (one for each BJCP category) moving on to the Best of Show round, all of the remaining entrants in attendance started opening their other beer (the one brought in case a first round category win happened and a second bottle was needed).  It sort of (de)generated into a big party.  Jeff from Bikes, Beer & Adventures earned a second place in the Sour Beer category and was kind enough to let me sample his winning Flanders and drop some knowledge about blending.  He also shared a bottle of his Oud Bruin that I thought was really interesting.  I also got to try beers from other participants as well.

Unfortunately, Senne Valley Saison didn't place in the competition.  I'm looking forward to getting the judges scores in the mail even though I'm told they used a short form version of the BJCP scoresheet that doesn't really allow for detailed comments.  Maybe I'll have better luck next year.