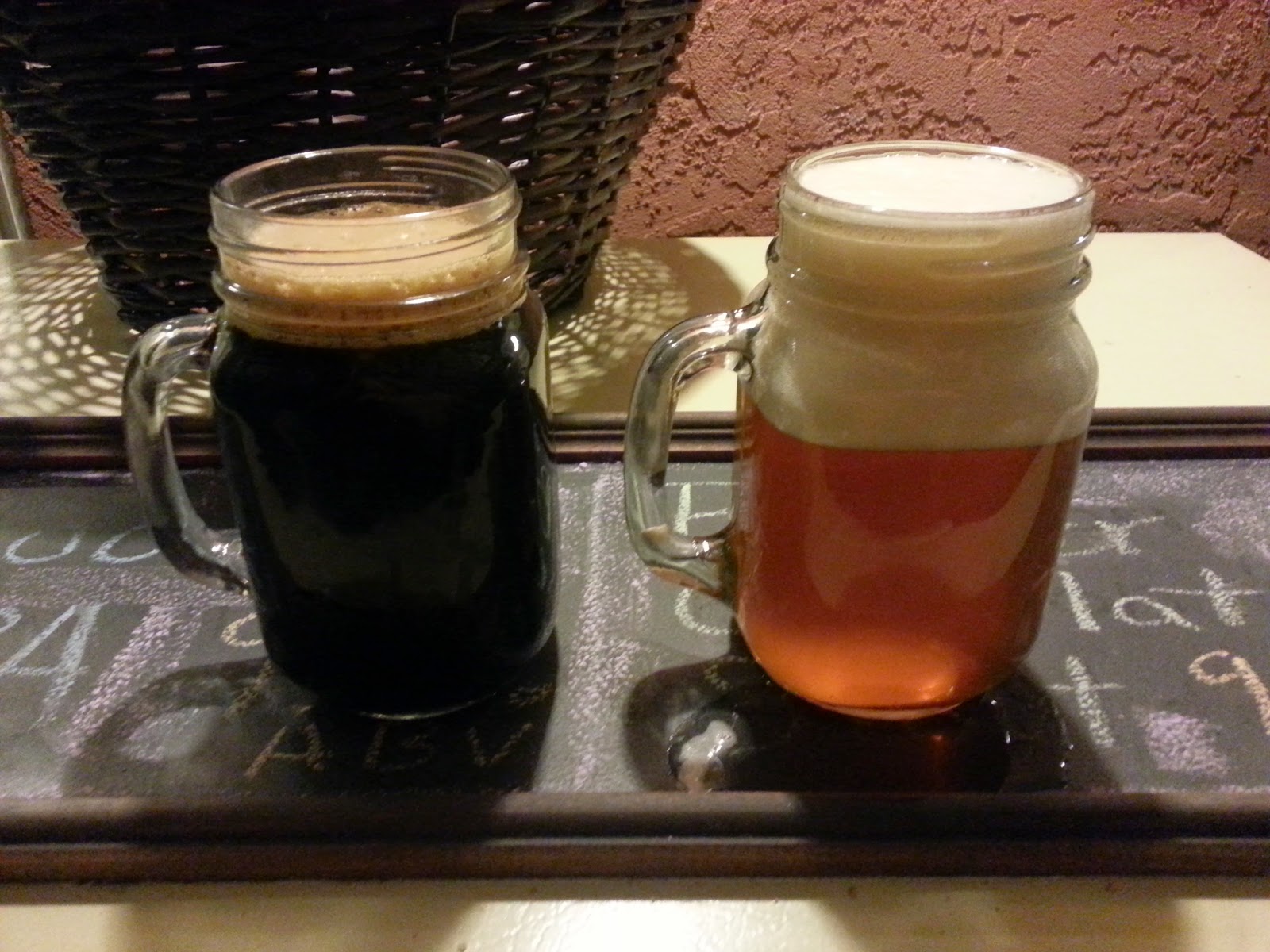 
A simple grain bill, with just enough residual sweetness and a ton of hops made this beer the counterpoint to the Bitter Stout.  The bitterness needed to cut through the ABV came exclusively from hops, though there was also plenty of aromatics meant to compliment the significant heat in the end result.  This beer came out intensely floral and finished just a bit too sweet at around 1.020.  If it had dropped another 8 or 10 gravity points, the result would have been significantly less cloying.
Posted by Daniel Schroeder at 9:47 PM 1 comments

Citrusy, resinous, spicy, peppery, dank.  Many of my favorite hops can be properly described using these adjectives.  Add terms like herbal, minty, warming, cola-like, sweet, and eucalyptus and you're describing something even more complex than Simcoe or Ahtanum or Mosaic.  You're describing cardamom.

In my case, specifically green cardamom.  I have some family roots in Scandinavia and grew up with some exposure to traditional foods from the region like lefsa, which my grandmother used to make for special occasions.  Cardamom is common in Scandinavian breads like pulla and julekake.  I've made pulla bread before, and the cardamom flavor is intense and clean with a strong herbal lemon quality that can suggest menthol and finishes with a refined sweet peppery note.  It's complex to say the least, and a small amount goes a long way.

I decided to make a milk stout with cardamom as the key flavor component.  Inspired by Yak and Yeti's Chai Milk Stout, I set out to accomplish something similar, but without the rest of the chai spices (cardamom is commonly found in masala chai tea, as well).

I made a simple tincture with cardamom pods, mixing 1/3 cup of the pods with 1/2 cup of vodka and letting the mixture sit in my dark garage for a week.  Today I'll be straining the pods from the vodka, then I'll add a small amount of the tincture to the entire five gallon batch after racking it into the keg, tasting as I go.  I'm guessing 2-5 drops will be plenty as the tincture's flavor is beautiful but intense.

One of the first beers I ever made was Papazian's Who's In The Garden? and I was instantly impressed by the role that spices could play in a beer's flavor.  Offer me a wheat beer and I tend to balk, but proffer a wit, and I'm always interested.  The hazy whiteness, the aromatic citrus blend of curacao and coriander seed, the gentle bitterness that those spices impress upon the palate.  In the years since, I've tried plenty of other wits, from the splendid perfection of Celis White (a sad brewing story of corporate greed and product mismanagement that discarded one man's craft in the mad grab for profit) to the disappointingly generic Blue Moon.  I've also made a few other wits and have come to some simple conclusions that are completely biased in favor of my own preferences:

I gave this recipe a twist by using dried tangerine peel in place of the curacao.  Tangerine's somewhat milder flavor compelled me to add a bit more than I typically would, but I think the result will be special.  My decoction mash went as planned and it fermented out cleanly.

Yeast
As for the name, well, if you don't get the reference (or do and are a fan) click below:
Posted by Daniel Schroeder at 12:31 PM 2 comments 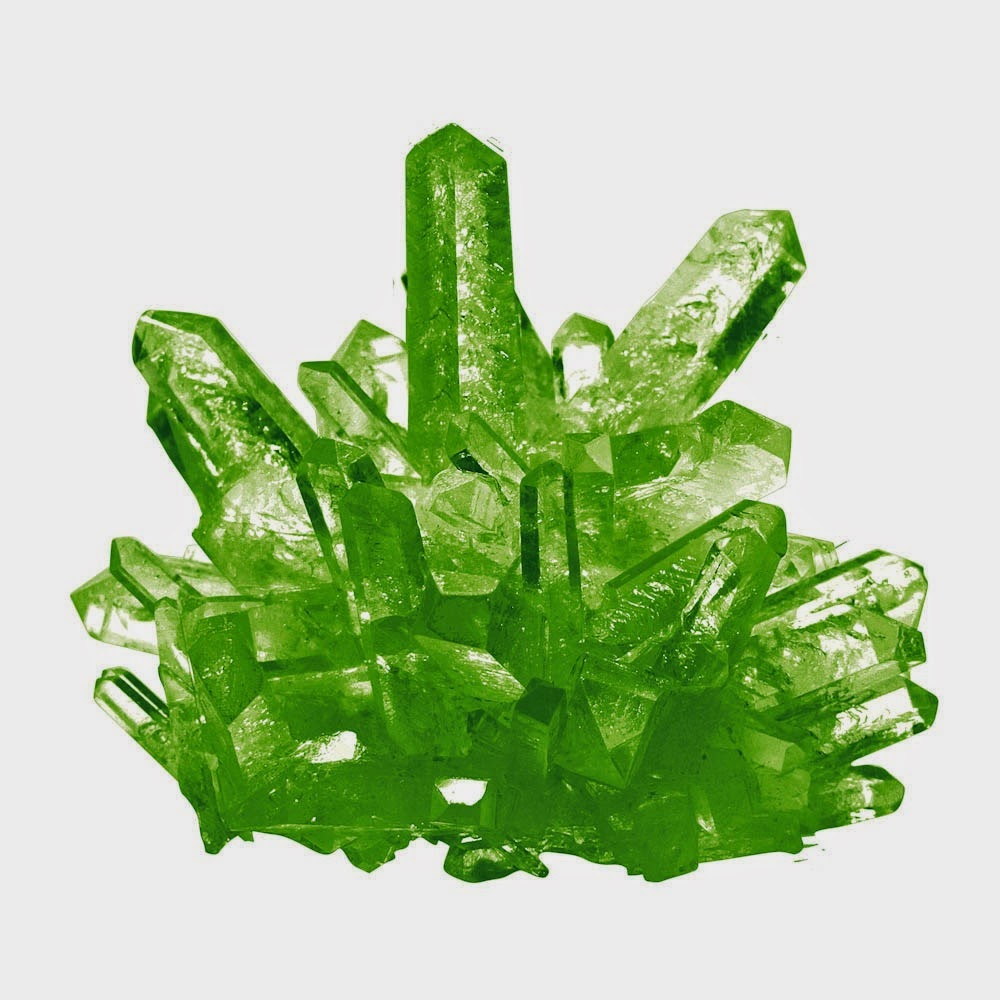 American to German to Cascadian in 6 Weeks

Beer production has been steady these past few weeks, blogging has been slow.  Here's what's been going on:

At the beginning of May I did a rebrew of one of my favorite homebrews:  Handsome Grandson Double Rye IPA.  I don't rebrew beers too often but this particular beer went over so well last time that I decided to make it again with minor changes.  The recipe is a riff off of Tasty McDole's Pliny Clone, but with a rye element to make the final taste a little spicier.  It's basically the same as before but without the crystal rye malt and some small hop changes to mix it up a bit; I wanted to use feature Simcoe.  This version came out at 9.3% ABV but tasted like it was 7%.  It's been on tap for almost a month but is almost gone thanks to a couple of growler fills for friends and a few good nights with fellow homebrewers.  If (when) I brew it again, I'll try and dry it out even more. 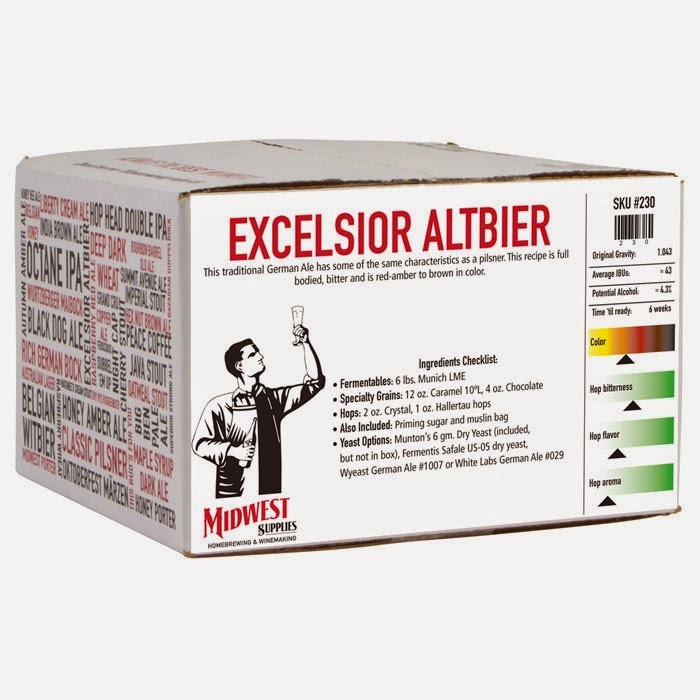 I bought a recipe from Midwest Supplies for my brother on his birthday.  He brews when he has time and doesn't have any temperature control so Midwest's saison kit seemed like a good fit for warm summer brewing.  I picked up their Excelsior Altbier in the process (and got free shipping) so it got brewed at the end of May.  It's a Dusseldorf-style recipe so it should be both bitter and malty at the same time with plenty of prominent hop character.  Basically an assertive, flavorful, clean German ale.  Some cold conditioning after primary fermentation and lower than normal ale temperatures should clean it up a bit.  I did a small diacetyl rest just in case, and should have it on tap in another 10 days or so.  I wonder how different a Northern German Altbier would be when tasted side-by-side?  Last time I was in Germany I didn't have the knowledge or palette to explore all that the German beer scene has to offer and I've been regretful since my eyes were opened by homebrew.   I've had mixed results with beer kits but this is my first time sampling the wares from Midwest and I'm optimistic.

Fellow homebrewer and aspiring randonneur, Eric (of Parallel 32 Brewing), took it upon himself to generously host a Summer Homebrew Competition this August.  This is a "friendly" with the main goals being to learn something in the process, drink some interesting beer and fun. We've focused on different styles, colors, and the use of particular ingredients for previous competitions.  The only stipulation this time is the use of WLP 041 Pacific Ale Yeast, a type that's relatively unfamiliar to all participants.

Yesterday I brewed a Cascadian Dark Ale for the competition.  While the BJCP has moved to make Black IPA a style variant in the upcoming 2014 revision of the Style Guidelines (Gordon Strong's .ppt presentation here), I tend to think of Cascadian Dark Ale as a better descriptor.  There may even be room for both Black IPA and CDA in the style guidelines, but I don't know if it's necessary.  Cascadian Dark Ales should showcase hops from the Pacific Northwest, include some roasted character but not nearly to the point of a porter or stout, and should feature Sinamar or Carafa or some comparable specialty grain to add color without bitterness.  The final product should be dark brown to black (30 - 40 SRM), smooth and lacking in major astringency, and hoppy in a way that is unusual.  The darker roasted malts should bring out hop flavors that are harder to find in a paler counterpart (like mint, rosemary, or other herbal flavors) using the traditional American IPA hops.  You can really geek out on the semantics discussion by watching the Brewing TV video below.  They do a really nice job of characterizing the style and looking at the naming debate from multiple perspectives.

I wanted to keep my grain bill simple, end up on the low side for SRM, and showcase Mosaic hops (a Simcoe progeny).  My final recipe looks like this, though I wanted to use CaraAroma instead of the Crystal 120 but couldn't get my hands on any.  The Doug Flag in the beer's name refers to the flag of Cascadia, which contains a Douglas fir tree and colors representing the landscape and sensibilities of the Pacific Northwest and its residents. 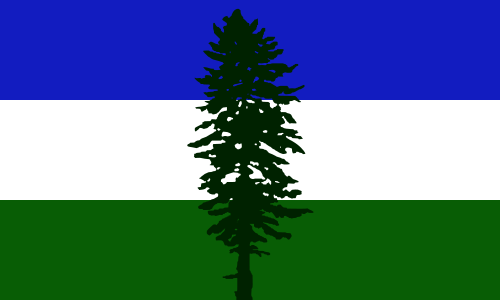