Three+ Years of Lambic -or- I Do a Decoction Mash

Step mashes are intimidating.  Different water volumes and temperatures.  Infusing here, removing wort there.  It's one of the more advanced brewing techniques that I have yet to take on.  When my friend Steve gave me over 20 pounds of fresh Cabernet grapes a few months back, I immediately added half of them to a nearly year old Flanders Red Ale.  I froze the remainder and started to mull over the best use for them.  Ultimately I decided to do the following:


It's an ambitious plan when you think about timelines and the potential for error-much like mead in that sense.  The desired final product is close to half a decade in the making and that's a long time to wait for certain uncertainty.  I'm hoping that I can make a quality fruit lambic using portions of the first one I brew when it's less than two years old.  With this plan solidified in my mind, I set out to learn all I could about the complexities associated with traditional lambic brewing.  I reread websites and books that had offered guidance in the past and approached them with renewed creative context.  As usual, I scoured the web for more information, the jewels of experience that make such a huge impression on my resolve to go forward with something potentially disastrous.

Traditional lambic brewing in the vein of Cantillon, Haansens, Oud Beersel and others typically utilizes a series of steps.  Water of different temperatures and volumes is added at particular times to raise the mash temperature and convert different starches.  Likewise, runnings are pulled from the mash and heated to halt enzyme activity and provide some of the long-term fermentables that keep non-traditional fermentation agents busy and make lambic interesting.  I went ahead and followed a comparable procedure, taking much from the Mad Fermentationist and his post on turbid mashing among other sources.  It was complicated and a little nerve-racking but worked out well in the end  Here's how the decoction mash shook out: 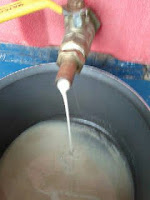 I adjusted volumes slightly on the fly in order to reach the desired temperature at each step.  I ended up gathering more than 8 gallons of wort when the sparge was complete, and a pretty hard two hour boil yielded the 6+ gallons I needed (5 gallons for the lambic and one gallon for a dregs batch made with Goose Island Sofie bottle dregs).  Pulling runnings from the wort at different times was really interesting, with the liquid coming out milky white and primordially hazy.  I ended up with a better original gravity than I expected based on past efficiency, and pitched Roselaire Yeast shortly after chilling.

I'm really excited to get this process under way and am already thinking about the recipe for Lambic #2, planned for roughly a year from now.
Posted by Daniel Schroeder at 7:56 PM 2 comments

I brewed last weekend for the first time since mid-July.  It's the longest I've gone without making a beer in recent memory.  I was able to get two beers done, but it took all day: 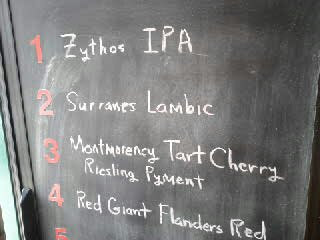 
After blending Flanders Red Ales with Lewy a few weeks back, we poured all of the remaining yeast cakes into a single carboy.  The huge cake comprised multiple pitches of Roselaire and innumerable dregs batches.  Seeking to continue some of the success we had, I brewed a new Flanders Red recipe and pitched it directly onto the cake after chilling.  The new recipe focused on Vienna as a base grain with some significant wheat for mouthfeel and crystal for color.  I had planned to use Special B but couldn't get my hands on any prior to brewing.  The brew session was sort of a mess.  I spilled a bunch of first runnings through a faulty seal in a bucket.  My SRM, gravity, and volume were all off.  My garden hose broke right when I needed to start chilling post boil.  It'll probably be the best beer I've ever made.


I bought a pound of hops from Hop Union that approached hops in a completely different way.  Traditionally, hops are always sold as harvested varietals, with the brewer deciding if and how to combine desirable flavors.  Hop Union created its Zythos blend of hops specifically as a multi-use hop for IPAs and other American-style hop-forward brews.  The idea of creating a proprietary blend of hop varietals and selling it under a single name is pretty interesting and Zythos is supposed to have many of the most desirable characteristics of favorites like Amarillo and Sorachi Ace.  I wanted to use Maris Otter in quantity for this beer and added a little bit of color and head retention properties with some non-fermentables.  A full 8 ounces of hops go into the recipe, and it's the first beer I can remember making that uses a single hop for bittering, flavor, and aroma.  WLP051 CA Ale V should impart some fruit notes to compliment Zythos' supposed tangerine, lemon, grapefruit and pine flavors and aromatics.
Posted by Daniel Schroeder at 12:19 PM 0 comments

I made my first real homebrew on March 7, 2004.  I remember it being cloudy and overcast outside.  The sort of day that suggests activities inside. I had bought an aluminum pot, and made the beer on the stove in my kitchen.  The London Brown Ale recipe was chosen because it was supposed to mature quickly and be drinkable faster than others.  I was 24 years old, unmarried, no kids, no expectations.

Why was I brewing?  Because things that you make on your own retain more meaning than things you buy and consume passively.  Because I didn't have any money.  Because I wanted to make something unique.  Because I was (and continue to be) idealistic.  Much has changed since then.   In the interim moments between making my life something more than myself, I've found time to brew 112 beers.  Here's how they're
categorized: 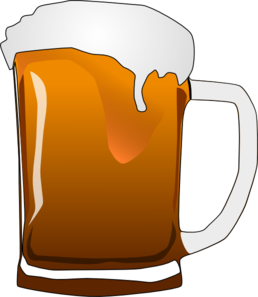 I've made plenty of beers in style categories that I love to drink, and I plan to continue doing so.  Pale Ales, IPAs, Porters and Saisons will always have a place in my kegerator.  However, I also want to make new beers and experiment.  Looking at the list gives me some perspective and provides guidance as to styles I want to brew soon: