The weather's heating up and it's time to brew a lager or two.  This will be the fourth summer in a row that I have taken the kegerator offline and dropped the temperature for lagering.  It gives me a break from drinking (kegerators are incredibly accessible for the brewer prone to over-indulgence) and a chance to branch out and try some different beer styles.  Last summer I felt like I really nailed down the lagering process, so I plan to apply those lessons to these next two batches.  Being comfortable with the process means I also feel confident in pushing the envelope and doing some non-traditional things.  Here are the beers I plan to brew next week and the recipes that go along with them:

Traditional bocks are dark and strong with a malty profile.  Munich and/or Vienna malts make up the bulk of the flavor components, with hops and yeast playing secondary roles.  The clean lines in a traditional bock should make a good platform for the addition of tart cherries, and I plan to push the SRM envelope a little to make the color match.  I'll brew the base beer with mostly traditional ingredients and processes (my second try at decoction mashing), and then add the cherries as lagering finishes.

I had success with 30 Fathoms Baltic Porter last summer.  I also really enjoyed Chad Y's 100% Brett B Baltic Porter.   I want to sort of combine ideas from each, leaning more toward a ttraditional lager fermentation but still incorporate Brettanomyces into the mix.  The recipe will mimic 30 Fathoms with the addition of non-fermentables to increase the perception of mouthfeel and a dosing of Brettanomyces near the end of fermentation or at bottling.  I'm hoping for something very digestible and lager clean.  I'm not sure what strain of Brett is most appropriate but will probably try and use something I haven't tried before (i.e. not Brett Drie). 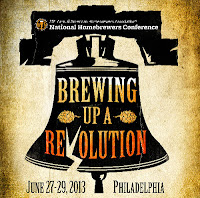 I had some good fortune in the Second Round judging at the National Homebrew Conference this year.  My KTG Russian Imperial Stout earned a third place finish.  I couldn't be more pleasantly surprised.  While I think the beer is fantastic, there's certainly a large degree of luck involved as subjectivity in judging beer is impossible to eliminate completely.  More than anything else I'm excited to see the score sheets and read the comments from some of the most talented and experienced judges in the world.  I made my version of the beer after being inspired by Lewy's, a great beer in its own right.  I'll be rebrewing it in the near future.  I just wish I had more than one bottle left...
Posted by Daniel Schroeder at 2:32 PM 1 comments