The Perils (and Triumphs) of Experimentation

When you're standing at the edge of discovery, staring into the abyss, it's hard to take that step away from the known and familiar.  When you put yourself out there you risk failure and disappointment when things don't work out, but stand to gain knowledge and a sense of satisfaction if you innovate successfully.  I've had  homebrewing experiences in the last month that have fallen on both sides of the spectrum.

In mid-July I brewed side-by-side experimental saisons.  Antagonist Dark Saison had dates and molasses added, and Protagonist Cucumber Saison got dosed with (you guessed it) cucumber in secondary.  Neither beer came out the way I hoped.  Truthfully, neither one was palatable in the least.  In the course of brewing over 100 different beers during the past decade, I've only dumped two as completely undrinkable.  Both of the saisons I made found their way down the drain last night, an experience that's disheartening.

I added too much molasses and dates to the Dark Saison, making the taste harsh and overly sweet at the same time.  With the Cucumber Saison, I left the cucumbers in secondary too long, making the cucumber flavor overpoweringly intense.  Both beers ended up with the their respective intended complementary flavors dominating.  I learned something in the process but the lesson was painful.

Lewy and I started out almost a year ago with the intention of making a delicious Flanders Red Ale and learning something about blending. The idea of making and learning about sour beers was the catalyst for the birth of this blog.  Our first sour batch was made collaboratively, and since then we've made many other sour beers and dregs beers, all of which have added perspective and experience to our brewing.  This past weekend we met at Lewy's house for our first attempt at blending.  With 25 gallons of Flanders Red to work with, we shrugged off intimidation and immersed ourselves in the process, ending up with (what we think are) amazing final products.

Here are the beers we had for blending: 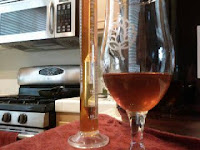 After trying different combinations we were blown away by Blend 7:

The finished beer had a beautiful fruit nose with a hint of the funkiness that you would expect in a Flanders.  It tasted tart enough to be refreshing but still retained plenty of the complexity that you get from bug fermentation.  The flavor was smooth and complicated, the color a clean even red.

Lewy and I split the ten gallons that we netted and are each going to crash cool the beer and bottle or keg it as we see fit.  We made two additional blends (one each) based on our own taste preferences and will get those ready to serve, as well.

**Check out Lewy's excellent (and more detailed) write-up on the entire experience for a clearer picture of the process.
Posted by Daniel Schroeder at 12:21 PM