I wrote about a new homebrew competition a few months ago where brewers interested in participating selected two preferred styles and submitted them for random selection as the guideline for a brew off.  With Irish Red as the ramdom choice, all brewers set off to craft their entry.  This past Saturday, six brewers met and shared beers and knowledge at Red Off IV (so named because we've hosted three previous red-style homebrew competitions, all American Amber Ales).  In addition to the six different brewers, another thirty friends and family showed up to taste, eat and enjoy each other's company.  There was plenty of homebrew beyond just competition entries being shared, and the actual contest had a very positive vibe permeating it.  In the end the judging proved accurate in identifying the best beers, though all entries were very drinkable and close to style with aggregate scores between 30 and 40 for all beers.  The results:


Lewy's Alroy Irish Red was clean and balanced with a beautiful red hue and just the right type of maltiness you'd expect in an Irish Red.  It had delicate hop aroma and flavor and muted but detectable yeast character.  It was a definite winner.

Take a look at the score sheet used below.  It follows BJCP guidelines but is simplified for novice and experienced judges alike. 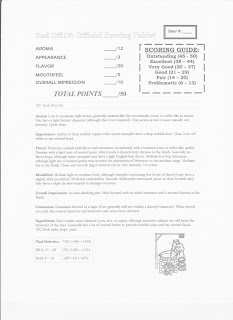 Posted by Daniel Schroeder at 8:23 PM